NFL Primetime is returning to ESPN, but behind the ESPN+ paywall - Awful Announcing 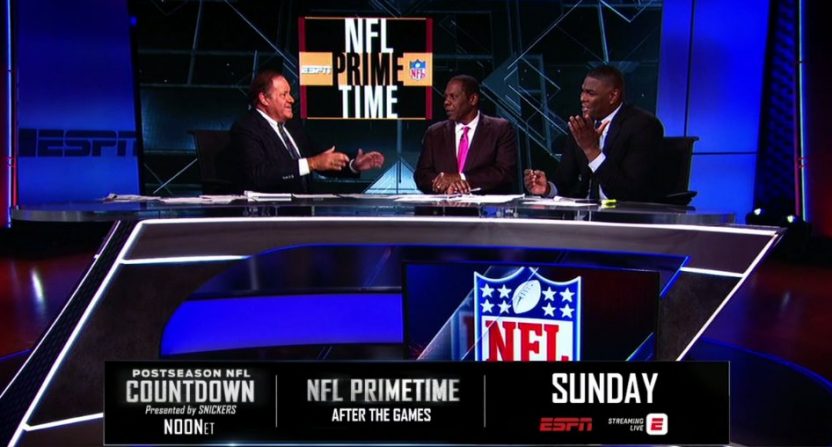 ESPN is bringing back NFL Primetime….but you won’t be able to watch on its traditional channel.

According to John Ourand of the Sports Business Journal, and confirmed by ESPN, ESPN is bringing back Primetime starting this Sunday, but it will only be available behind the ESPN+ paywall. Primetime will air at 7:30 PM on Sunday, and will be available on-demand through Wednesday evening.

Chris Berman and Tom Jackson will return (thankfully, because it really wouldn’t be Primetime without either of them) to call the highlights, and per ESPN, the Primetime broadcast will be updated after Sunday Night Football and Monday Night Football with highlights of those games, narrated by Scott Van Pelt and Joe Tessitore, respectively.

This is the third original NFL-focused program on ESPN+, and the first not hosted by Peyton Manning (Detail and Peyton’s Places are the other two, and I guess you could argue that Draft Academy is also NFL-focused).

I don’t think anyone will complain too much about this (aside from it only being available behind the paywall), and given the positive response to last week’s SportsCenter reunion between Dan Patrick and Keith Olbermann, ESPN clearly realizes that going back to the nostalgia well is an easy way to generate goodwill and positive reactions from its viewer base.

I'm the managing editor of Awful Announcing and the news editor of The Comeback. I also made The Outside Corner a thing for six seasons.