H0LiCOW: Cosmoboffins still have no idea why universe seems to be expanding more rapidly than expected - The Register 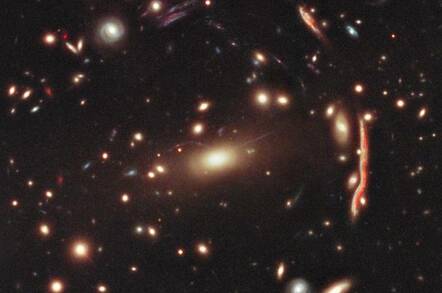 Cosmologists are scratching their heads after the latest measurements of just how fast the universe is expanding raises more questions than answers.

Scientists have been trying to pin down the exact value of the Hubble Constant, a number that describes how far galaxies are receding over a specific time and distance as the universe expands, for nearly a century. Georges Lemaître, a Catholic priest and physicist who also first proposed the Big Bang theory (no, not the TV show), attempted to calculate that number in 1927.

Now, thanks to better technology, scientists can actually rely on real data rather than just mathematical wizardry. The latest measurement made by a large team of cosmologists known as the H0LiCOW collaboration, which stands for H0 (an abbreviation for the Hubble Constant) and Lenses in COSMOGRAIL’s Wellspring confirms that the universe appears to be expanding faster than expected – and can’t be explained by the current standard model.

“There has been an intriguing pattern of differences in the Hubble Constant that appear to depend on which end of cosmic history its value is measured,” Adam Reiss, a professor of physics and astronomy at John Hopkins University, who isn’t part of the H0LiCOW team explained to The Register. Reiss was part of the trio of physicists who won the Nobel Prize in Physics in 2011 for discovering that the universe is expanding at an accelerated rate.

“Of course we should get the same answer at either end assuming we understand the physics of the universe. There is a lot of well-motivated speculation that the source of the discrepancy involves our understanding of the Universe and the new H0LiCOW results reinforce this tension,” he said.

The Early Universe vs the Late Universe

The Late Universe measurements are made using what's called the standard candle method, a technique that allows scientists to measure long distances by studying the brightness of Type Ia supernovae. The Early Universe measurements, however, looks at cosmic microwave background (CMB) radiation leftover from the Big Bang.

“People believed that the differences between both measurements could be down to some internal systematic error,” Geoff Chih-Fan Chen, a PhD student at the University of California, Davis and a member of the H0LiCOW team, told El Reg.

“So we used an independent method that involves looking at the gravitational lensing effects of quasars to measure distance and calculate the Hubble Constant using the Hubble Space Telescope.”

The team estimated a value of 73.3 kilometers per second per megaparsec, a number that supports the standard candle method. “So, the initial idea that it could be down to a systematic error is not true, and, therefore, the contention is real,” Chen added.

The CMB method relies on strong assumptions from the standard model of cosmology, where the universe is considered flat, or that the density of dark energy - an unknown source of energy that could be driving the expansion of the universe - permeating space does not change over time.

If these assumptions are wrong then it’ll mean the standard model of cosmology is wrong too. “It’s a problem for theoretical physicists, they need to figure out how to resolve this tension,” he said. In the meantime, however, the H0LiCOW collaboration hopes to contribute to this issue by taking more precise measurements of the gravitational lensing effect of quasars.

In their first experiment they studied three quasars, in their latest attempt they studied six quasars. Next, they hope to expand their sample size to 40 quasars.

Chen presented the team’s research at the 235th meeting of the American Astronomical Society in Hawaii, this week. ®

Sponsored: Detecting cyber attacks as a small to medium business